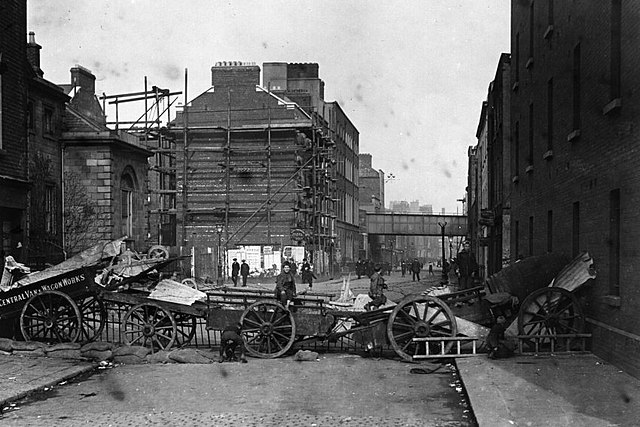 JAMES CONNOLLY AND THE DUBLIN UPRISING OF 1916

In honour of St Patricks Day join Martin Crick for this one off lecture about the remarkable James Connolly who was executed by a British firing squad on 12 May 1916 for his role in organising the Easter Rising against British rule in Ireland. Connolly was one of the foremost socialist agitators of his day, and he is one of the most well-known, most revered, but also most misrepresented or misunderstood characters in Irish history.

Two ballads dedicated to his name help to explain the difficulty in assessing his life and his achievements. In one he is ‘the brave son of Ireland’, the rebel wrapped in a green flag, in the other he is ‘the hero of the working man’, marching under the red flag. To many these are two contradictory worlds. Connolly understood this himself, telling his wife Lily on the eve of his execution that his fellow socialists would ‘never understand why I am here.’ In this survey of Connolly’s life I aim to offer some explanation of why James Connolly, revolutionary international socialist, decided to fight alongside nationalist rebels against the might of the British Empire.